In the second grade, I wrote an elaborate “scary story,” complete with colorful illustrations and as much suspense-filled detail as a seven-year-old could muster up. My family praised my work on high, fulfilling their parental duties, and it was set—I was going to be a writer. After about six more imaginary career changes between the ages of 10 and 23, I have come full circle back to pen and paper (I do still write things out on paper). This time, however, the topic isn’t ghouls and monsters, it’s savories and confections.

In my junior year at Boston University, I applied to be a writer for the new chapter of Spoon University at BU. Spoon University is a national food publication written by college students for college students sharing their love of food; the site has gained much recognition over the past year. Little did I know that I would become the Editor-in-Chief of the BU operation just three months after sending in my application and crossing my fingers that I’d be taken aboard. Although I was skeptical at first about my ability to handle the weight of this position, soon enough it all came naturally, and I found myself filling the Editor-in-Chief shoes with ease.

This was my first experience in a structured editorial environment, and I had just hoped to dip my toe into the buttercream. Consequently, it became the jumping off point for my future in food writing and becoming a grad student in BU’s Gastronomy program. I faced some challenges trying to popularize the BU Spoon University chapter and influence such a large student body with fast-paced schedules and widely-varying interests. With seven members to start, our team rapidly expanded to 20, then 50, people. We became a familiar name on campus and shot up from the 39th-ranked chapter within the Spoon University college network to number two.

Over the full year that I spent as Editor-in-Chief, I learned not only about 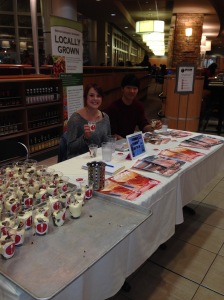 food in the Boston area, but also how to manage a large team of people, maintain a website with up-to-date and captivating food content, and create a fun and positive work environment. I also learned that the food writing field is where I need to be. As I realized this, I was simultaneously applying to the Gastronomy program. After watching my best friend and co-leader of Spoon University BU, Laurel Greenfield, go through her first year as a Gastronomy student, I awaited my own acceptance. Upon receiving the exhilarating news that I got into the program, I knew that there was nothing better I could do for my future food writing career.

I am currently taking two core classes this semester, the first being Introduction to Gastronomy: Theory & Methodology with Karen Metheny. It which covers an array of disciplines related to the field of gastronomy, along with giving students a solid understanding of what gastronomy actually is. The second class I am taking is History of Food with Kyri Claflin, where students gain an understanding of historical method while exercising it through class work and a culminating final project. I plunged right into things as I often do with these two courses, which both demand a high quantity of work, but I have found myself advancing each week. Class readings and discussions have elevated my way of thinking when it comes to a piece of theoretical or academic writing, and I have learned to critically dissect these works while drawing parallels between them.

Taking these two classes together has been an eye-opening experience, allowing me to understand what the gastronomy program and grad school in general are all about. I have found that it is about digging deeper than you thought you had to, or thought you could, into your work, and as a result, being able to draw your own conclusions and form your own opinions with certainty. In terms of writing, I have begun to find my academic voice, and I know that further classes with help me hone in on that skill. I am looking forward to taking the Food Writing class with Corby Kummer in the spring and having the opportunity to bring some focus to my writing. I hope to inform my food writing and create a foundation for myself to move forward in the editorial field in a meaningful and scrumptious way. Each day I wake up I am hungry for words (and ice cream).