With a new year comes a new semester of food studies at Boston University, as well as a new batch of food-lovers embarking on their journey as future food scholars. We are pleased to have another great cohort  joining the Boston University Gastronomy Program. These new students have been asked to submit a picture of themselves, a short bio, and what they love most about food. 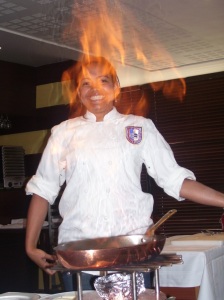 Claribel Alvarado was born in the Dominican Republic, but has lived in New York City more than half her life. She has a Bachelor’s Degree in Hospitality Management from New York City College of Technology (City Tech) with a concentration in the culinary arts. While a student at City Tech, she was awarded an opportunity to study abroad at CFC Mederic Ecole Hoteliere de Paris Jean Drouant. Upon completion of her study abroad program, she was awarded a Certificate in French Culinary History and Techniques. The economic uncertainties of the last few years persuaded her not to leave the secure benefits guaranteed by public service. She currently works for the New York City Police Department (NYPD) which is the furthest thing from the culinary world.

Claribel writes “I love my job, but I have a passion for food and cooking. I subscribe to several culinary publications. I love trying new recipes and putting my own spins to it, experimenting with flavor, ingredients, how to balance aroma and taste. I love eating out, and living in NYC provides an amazing array of the best cuisines representative of the world. I’m looking forward to completing the Certificate in Food Studies and make myself eligible to enroll for the Master’s in Gastronomy. I would like to teach culinary arts to underprivileged and at risk teens and also own a small café or restaurant.”

James Martin Moran is a Massachusetts native, amateur photographer, avid traveler, and typical foodie. The evolution of his interest in all things food started when he was fresh out of Boston College: he simply wanted to learn how to cook for himself. Since then, he has filled a floor-to-ceiling bookcase with timeless cookbooks ranging from Julia Child and Craig Claiborne to Alice Waters and America’s Test Kitchen.

In 1992, James moved to Los Angeles, officially as a Ph.D. student in Cinema-TV at USC, but in his spare time, he enrolled in a Professional Chef certificate program at the Epicurean School. Although the credential paved the way to work in a kitchen, his career goals leaned more toward working with both food non-profits and the food industry as an advisor mediating between big food profits and slow food culture. In 2008, he moved back to Boston and started volunteering at Community Servings, Cooking Matters, No Kid Hungry, and Mass Farmers Markets. Working in marketing at the time, he decided to earn a Certificate in Nutrition for Communications Professionals from Tufts. Now, as a consultant with the Foodscape Group, a nutrition strategy advisory firm, he is excited to continue my food education in the Gastronomy Program.

Jerrelle Guy was born to a creative family in sunny South FL. After spending much of her adolescence writing poems, painting, making short films, and pausing in between to devour food to fuel more artistic creations, she soon identified herself as an artist fostered by the magic of food. With her finger, literally, in one too many pies, she moved to New England to get her BFA from the Rhode Island School of Design.

For Jerrelle, food has become inseparable from art.  She turned nearly every RISD assignment into a commentary on food.  She studied in Rome under the guise of learning ancient Italian architecture, but technically spent more time at the local pizzeria. She started a food blog, Chocolate for Basil, where she began showcasing her food illustrations alongside recipes. And after graduating, she moved to Dallas, Texas and used her design degree to work with Commercial Photographers and Stylists specializing in Food Advertising.

Her passionate spirit, impulsive behavior, and voracious appetite have landed her in front of so many delicious plates, and eventually, of course, in front of the application site for BU’s Gastronomy Program. Her plan now, is to discover more avenues where food and design intersect, and possibly even help carve some new pathways herself.

Jamie Schwarcz was born on Long Island, NY where she spent her childhood frequently visiting New York City with her father. During their visits, her love of all things food, wine, and cooking began to develop. She loved talking with her father about the ingredients and history behind each dish they were enjoying. When she was not learning from her father, she was spending time in the kitchen with her Hungarian grandmother making sure that every family recipe was accounted for.

Jamie obtained her undergraduate degree from Boston University and currently spends her days supporting the Boston University SAP Payroll System. She enjoys traveling to foreign places and learning about the local culture (especially experiencing the local cuisine), trying new restaurants, and spending time with family and friends. She is looking forward to exploring her passion of all things culinary and meeting the BU Gastronomy community.

Rachel Sholtes is on a mission to sniff, chew, slurp, touch, and talk about every possible type of cuisine. While her academic history lies in English literature and creative writing, what really motivates her to get up in the morning is the prospect of breakfast, lunch, dinner, and everything in between. So far she has managed to eat in 29 US states and 10 different countries, and hopes that the list continues to grow. Prior to relocating to Boston in November of 2014, Rachel worked for years with Counter Culture Coffee as a barista at a locally owned bakery in Baltimore. Since heading up North she has shifted her focus towards a different end of the beverage spectrum, joining a small Boston-area wine shop as a sales associate. Immensely interested in region-specific food histories, she has loved learning about the world of wine so far and looks forward to continuing her food education through every possible outlet.

Rachel is thrilled to be a part the Gastronomy program and hopes that it will facilitate her passion for eating, cooking, and storytelling, as well as help further her understanding of food sciences and the history of agricultural practices. She hopes to one day combine these myriad interests into a career that involves writing, recipe development, and advocating sustainable lifestyles for urban environments. 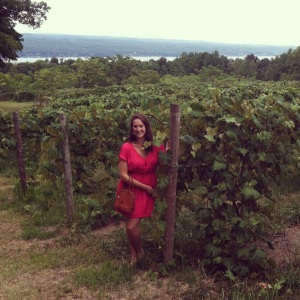 Rachel Beebe has lived on Boston’s South Shore for just nearly two and a half decades. She discovered her culinary prowess in the backyard when, at the young age of two, she decided to bread earthworms in sand and serve them with a side salad from the compost bin. Her dishes have grown to include actual edible items since then and her ambition and adventurous spirit with all things food have endured.

Like many who graduate from college with a liberal arts degree (UMass Boston, Anthropology), Rachel has spent a great deal of time figuring out what she wants to be when she grows up. She discovered BU’s Gastronomy program while still an undergrad and, after a brief hiatus following graduation, she decided it was the next step in the whole figuring-out-life process. During her days Rachel works at a cookbook publisher where she definitely lingers too long perusing the inventory for inspiration and enjoys evenings spent unwinding at the cutting board with a glass of wine close by. She loves produce shopping, mincing garlic and watching reruns of The French Chef. She is most excited to meet new people who share her obsession with food and to see what path her studies might lead her.

Juliet Tierney is a native Bostonian who decided to pack up and head out west to get her undergraduate degree in History and Sociology at the University of Colorado – Boulder. Between hiking the flatirons with her Portuguese Water Dog, Lucy, and attending CU-Buffs football games, Juliet was bartending at local bars and country clubs where she gained a passion for wine and craft beer. Hailing from a large Italian and Irish family, Juliet grew up watching Julia Child every Sunday morning on PBS and lovingly gained the nickname from her siblings, “Juliet Child.” Her prized possession at the age of 6 was a recipe autographed by the cooking guru herself. When she’s not posted up at America’s Test Kitchen in the customer service department, Juliet can be found going to wine tastings, walking around Brookline with Lucy, and perfecting her grandmother’s eggplant parmesan recipe (which she has decided will never happen).