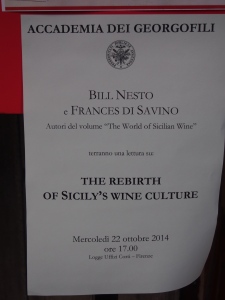 On Wednesday, October 22,  Bill Nesto M.W. , Metropolitan College Wine Studies instructor, and Frances Di Savino presented the book which they co-authored,  The World of Sicilian Wine (UC Press, 2013), at the Accademia dei Georgofili, in Florence, Italy.   Since 1753, the Academy has promoted practical research in the fields of agronomy, forestry, geography, and agriculture.

Bill and Frances lectured about the culture of wine in Sicily in honor of Domenico Sestini (1750-1832) whose memoirs of his research in Sicily were an important source for their book on Sicilian wine.  Sestini was an accurate and sensitive observer of Sicilian viticulture and enology.  A member of the Georgofili himself, he lectured to its members, on three occasions in 1812. He wanted to inform them about the inspiring achievements that Sicilians had made in cultivating wine grapes, making wine, and exporting it abroad.

More than 200 years later, Nesto and Di Savino came back to the Accademia dei Georgofili to continue his work, to honor it, and to thank him.